Please scroll down for speakers' profiles. 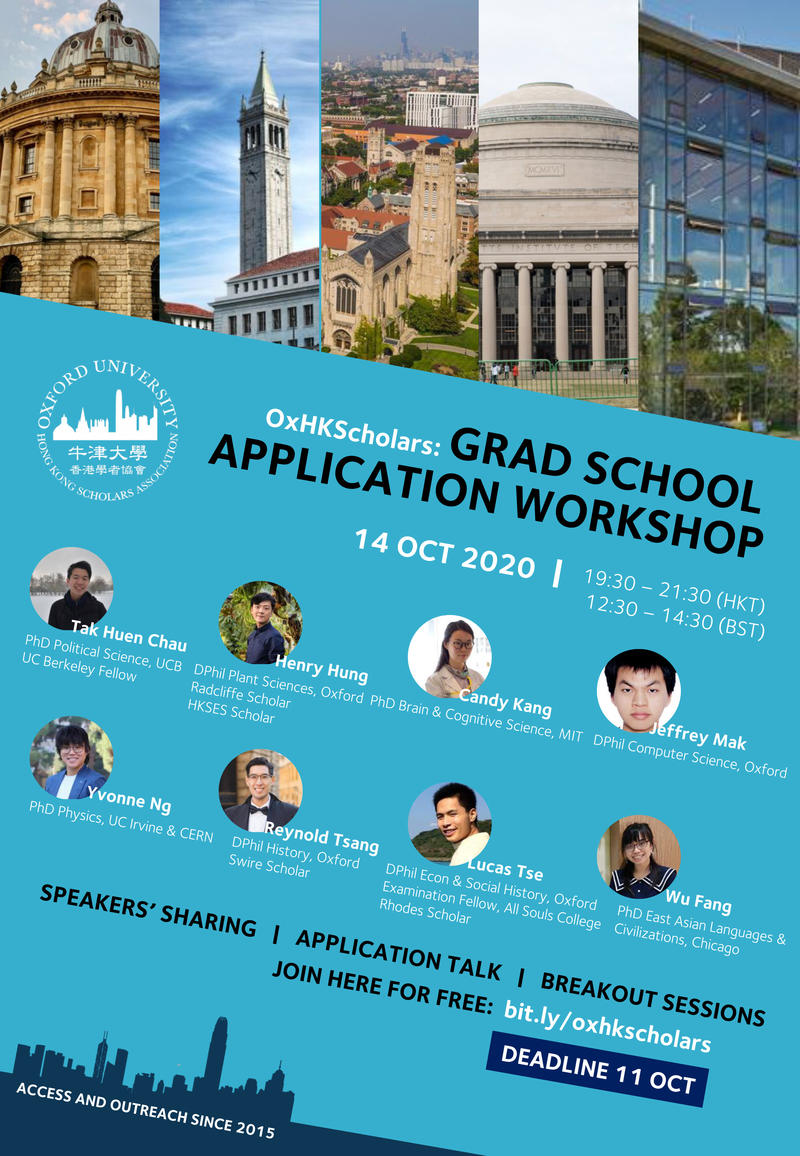 Tak Huen Chau is a first-year PhD student in Political Science at UC Berkeley, specialising in comparative politics. Before Berkeley, he read Philosophy, Politics and Economics at Merton College, University of Oxford. He plans to share aspects particular to social science graduate admissions, such as the writing sample. His studies are funded by the Berkeley Fellowship.

Henry Hung read Biology at The Chinese University of Hong Kong before coming to Oxford to pursue his doctorate in Plant Sciences under the BBSRC Interdisciplinary Bioscience Doctoral Training Partnership. He was awarded the Radcliffe Scholarship at the University College and also the Hong Kong Scholarship for Excellence. His research incoporates genomic model and climate data in forest landscapes to guide conservation and restoration. He serves as the Events Officer of OxHKScholars and the Public Relations Officer of Oxford University Taiwanese Student Society. He is also appointed to the Events Committee and Early Career Ecologist Representative of the British Ecological Society.

Candy Kang received her medical training at the Chinese University of Hong Kong and worked briefly as a clinician. That was when she discovered an inequality in information and decision-making power between patients and their healthcare providers. She went on to pursue a research career in system neuroscience at MIT. Her academic interest is to interrogate the relationship between the structure and function of the brain’s numerous connections in the context of normal aging as well as neurodegenerative diseases. She also gets excited about molecular and physical tools for disease screening or diagnosis. Candy seeks to understand neurological diseases at the fundamental end, and to apply new medical technology to help democratize healthcare services.

Yvonne Ng is a particle physics PhD candidate from the University of California, Irvine. She was based at CERN in Geneva, Switzerland working on the Large Hadron Collider Experiement for the last three years. She is able to answer questions regarding applying to PhD programs in the US as well as questions on what it's like to be a scientist on the largest experiment ever built by human kind!

Reynold Tsang is a DPhil student in History at the University of Oxford. His DPhil project looks at the development of museums in British Colonial East and Southeast Asia during nineteenth and early twentieth centuries. He is interested in a wide range of historical topics, including Hong Kong History, Museum History, Modern Chinese History, Colonialism and Imperialism in Asia.

Lucas Tse completed his MPhil in Economic and Social History at Oxford with the support of a Rhodes Scholarship (Hong Kong). Prior to that, his undergraduate work was at Deep Springs College and the University of Chicago. He is now reading for a DPhil in Economic and Social History as an Examination Fellow at All Souls College, Oxford. His current research focuses on global inequality, international organisations, and early 20th-century Chinese history.

Wu Fang is a first-year PhD student in East Aisan Languages and Civilizations in the University of Chicago. She is interested in pulling together excavated materials with the transmitted texts and examining the hidden messages in the minimalist narrative patterns of the excavated texts exposed the disenchanted complicated history of the pre-Qin period.